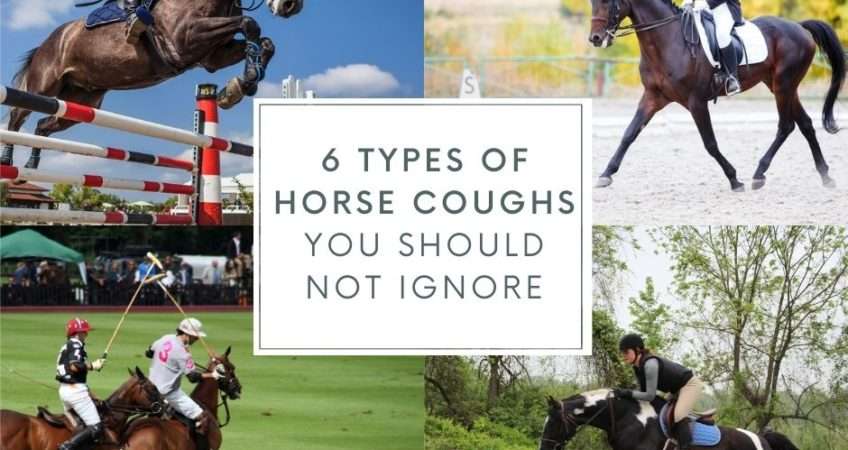 6 Types of Horse Coughs You Should Not Ignore If your horse coughs occasionally, there is normally nothing to worry about.  This is a perfectly natural way of keeping their airways clean from dust or small debris.

Some coughs, however, may be an early sign of an inflammatory condition that deserves prompt action.  Understanding the different types of coughs coupled with good judgment, may be key in knowing when to call in veterinary care.

Coughing once or twice at the start of an exercise routine is not unusual.  Clearing his upper airway of any mucus or small debris is your horse’s natural reaction at the start of work.

Should the coughing persist throughout the ride and limit performance in any way, the ride should be paused to investigate the cause.

If the environment cannot be found to have provoked this response, it could either be a physical abnormality or a sign of inflammation in the airways.

Any mucus expelling cough usually indicates an inflammation in one or more areas of the horse’s airways.  The thickness and colour of the mucus can give a good indication as to the cause of the problem:

Taking your horse’s temperature will quickly distinguish between an infectious and a non-infectious source causing the cough.  With a viral infection, fevers are often initially higher, whereas heaves would typically not cause a rise in temperature.

Horses that develop a cough a few hours after being off-loaded from a trailer, deserve a closer look, as horses that visit a show or event where they would have been exposed to others, can contract viral respiratory diseases like equine influenza or rhinopneumonitis.

There is also a form of bacterial pneumonia called ‘shipping fever’ that shows up in horses that spend long hours travelling in a trailer tied in such a way that they cannot drop their heads to clear their airways.

Call in your vet as soon as possible to either prevent spreading a contagious disease or address your own horse’s distress.

If a horse is standing around in a fairly well-ventilated area with no obvious dust flying around and then suddenly starts coughing, you would want to investigate.

It may be as simple an explanation as a small piece of debris having gotten stuck in the airways earlier, or as complicated as a tumor pressing against the airways. It may even be related to an earlier injury, like a kick to the ribs, that has caused inflammation in the lung.

In horses under 2 years of age, there are two serious causes of coughing:

This type of worm shows up in the gut after a foal ingests the eggs.  Soon after, it migrates to the lungs.  Here it eventually causes enough irritation for the foal to cough the parasite up to the top of the trachea, where the worm is then swallowed back into the gut.

Coughing in young horses always deservers special attention as this type of parasite can cause a great amount of inflammation in the airways of the lungs.

In foals younger than 4 months old, this bacterium can cause severe lung infections.  As the bacterium lives in the earth, the foal acquires the disease by simply inhaling the dust particles it lives in. The foal eventually coughs up and swallow the infected mucus, from where it gets passed on to the soil again with its manure.

The future of all coming generations of foals will be at risk if the soil infestation is not addressed.

If your horse chokes on his feed while eating, it normally resolves itself and is usually not life-threatening.

However, if your horse inhale any of the feed during the choking episode, it could put him at an increased risk of developing aspiration pneumonia, a severe lung infection.  Initiating broad-spectrum antimicrobial therapy immediately would be the call to action in such a situation.

Should this coughing-while-eating continue, there may be a few causes to explore:

Knowing the different types of coughs and the affects it may have, will go a long way in building your confidence in caring for your precious horse.