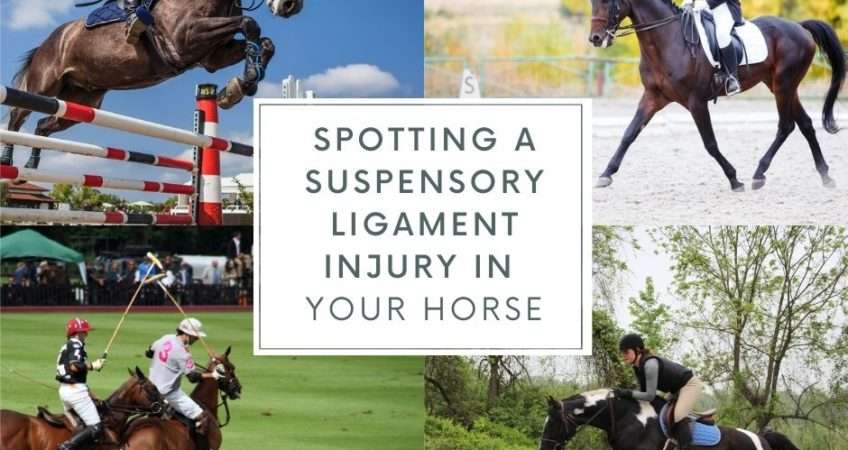 Spotting a Suspensory Ligament Injury in Your Horse The suspensory ligament acts as a sling for the fetlock in both the fore- and hind limbs and is therefore subject to overload and injury. Microscopic damage to the collagen fibrils builds up over time and causes long term changes in the ligament.

Proximal suspensory desmitis, or PSD, describes inflammation and/or damage to the upper region of the suspensory ligament at the top of the cannon bone.  This area is put under tremendous strain, particularly in sports horses which are required to “engage the hindquarters”, and horses trained on soft surfaces.

Hind limb proximal suspensory desmitis (PSD) is a common condition in sports horses and it usually presents in one of three ways:

The prognosis for a horse to return to full soundness is better in the forelimb than the hindlimb, with many of the latter permanently lame.

Although not an outright sign of PSD, studies1 have shown that a hock angle of 165 degrees or more is associated with an increased incidence of PSD.

This slide is from an online webinar by Richard Bristow, BVet Med CertAVP MRCVS, and shows the relationship between conformation and PSD:

Usually, a combination of a good veterinary clinical examination and imaging tests will be needed to make an accurate diagnosis.

As horses grow older, the collagen in their ligaments and tendons become weaker, and the suspensory ligament gradually stretches and becomes less elastic, especially in the hind limbs.

The fetlock has less support so moves lower towards the ground.

This condition can be painful, and the horse may shift weight from limb to limb more often than is normal.

Unfortunately, the suspensory ligament can break down completely in very severe cases and in worst cases, euthanasia may have to be undertaken.

Anti-inflammatories: Where an acute injury is present, anti-inflammatory therapy is useful to reduce ongoing damage and can be used long term in some cases. Box rest is essential at this stage.

Controlled exercise: This often encourages the laydown of new collagen fibres which can align themselves in an ordered formation. The repaired ligament will not be as strong as the original ligament and may never look normal on ultrasound scan.

Good farriery:  Maintaining correct foot balance and appropriate shoeing will provide some support to the function of the suspensory ligament.

Shock wave therapy: The use of extracorporeal shock wave therapy can help to reduce local inflammation and improve the long-term prognosis. However, it can also mask pain and should be considered very carefully.

Surgery: Unfortunately, many cases may require surgical treatment in the form of neurectomy/fasciotomy to regain soundness. This surgery has a reasonably good prognosis in the short term (one-two years). Even if a horse does not recover well enough to return to its original use, it may manage to work at a lower performance level.

Injured suspensory ligaments usually take several months to heal, perhaps up to one year or even longer in rare cases – and PSD can be particularly difficult to treat, especially in the hind limbs.