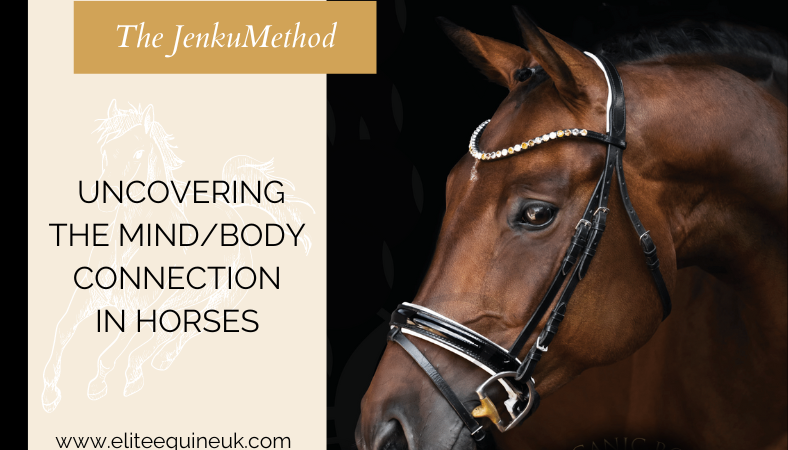 The JenkuMethod: Uncovering the Mind/Body Connection in Horses

Relaxation starts in the horse’s brain, but most conventional thinking and training doesn’t make allowance for or even consider the fact that there is a way to help horses enter relaxation before being asked for collection.  This week’s post helps uncover the mind/body connection in horses.

When we talk about the brain from the bottom up, the human brain has got three levels.

The base of the brain, the middle of the brain is called a feeling brain, and the frontal lobes are called the thinking brain.

The horse has a two-level brain: The base of the brain, and a feeling brain.

When they put their head down and the switch is triggered to the off position, the poll is lower than the withers and the horse registers that it is now in the rest and digest state. In this state, the blood returns to the intestines, their feet stop moving and their mouths starts moving.

This structure/function concept is critically important in understanding how a horse’s body affects their brain and vice versa.

The old horse masters used to say that the horse must chew the bit down to the ground.  This was 350 years ago, long before Pavlov discovered the autonomic nervous system in the early 1900’s! Although the old masters have experienced this phenomenon in a very visceral way, they just didn’t have a name for it. They knew that if a horse was able to relax and stretch forward and down, and chew the bit down to the ground, the horse would be more trainable.

The Mind/Body Connection in Horses

They also said that when you first back a young horse, that you should walk it for a year at least. When you walk a horse, obviously the horse is doing things calmly and quietly and slowly.

In martial arts, kata is choreographed patterns of movement that are practiced until mastery of a single form is achieved.  Remember “The Karate Kid”? There it was introduced as “wax on, wax off”.  Daniel had to do it 10,000 times before Mr Miyagi even allowed him to do a punch or a block. All that time, Mr Miyagi was teaching Daniel how to block the punches by just going through that motion of “wax on, wax off “ in a very calm and relaxed way.

Only then do you start training physical actions in the body.  At the physical level, if the horse is stretching forward and down into a grazing shape, their back muscles become uncontracted.  Only if their back muscles are relaxed, can you even begin to ask the stomach muscles to contract. When this happens, the horse is then able to rotate the pelvis and get his hind feet more forward and under the deepest part of the saddle where the rider’s weight is.

If a horse is not relaxed and they haven’t been taught the correct technique, they then try and lift the weight of the rider and the weight of their own torso with their neck.  This is very bad for their posture and general neck and spine health. To understand the importance of the correct hind feet manoeuvre, see Part 1 in this series:  The Right Hind Leg Jab in Horses.

The Value of Relaxation Before Collection

Asking them to make bigger circles becomes easier, smaller circles becomes easier, asking them to do proper extended trot, proper Piaffe, where the front legs actually come up properly, or Passage where the front legs come up properly, is only possible if the horse is physically bringing their hind feet forward and under, towards the deepest part of the saddle.

Trying to get the horse to collect by riding him forward-forward-forward in the conventional way, hoping that the horse will figure out that he must bring his own hindfeet more forward and under without actually deconstructing this complex skill set into smaller uncomplicated parts, is not the best method and will lead to both frustration in the rider and anxiety in the horse.

Conventional riding tends to think of the horse only as a physical being or a physical vehicle, telling it what to do without recognising any thinking or feeling or interconnectedness between the brain and the body.

Conventional riding does not consider that there is a mind/body connection.

Once this fallacy has been overcome, growth can happen.

Next week in The JenkuMethod: The Pro’s and Con’s of Food Rewards

If you live in Mainland UK or the Isles and would like a FREE palatability sample of our Elite Equine rosehip supplement, please forward your delivery details to [email protected]