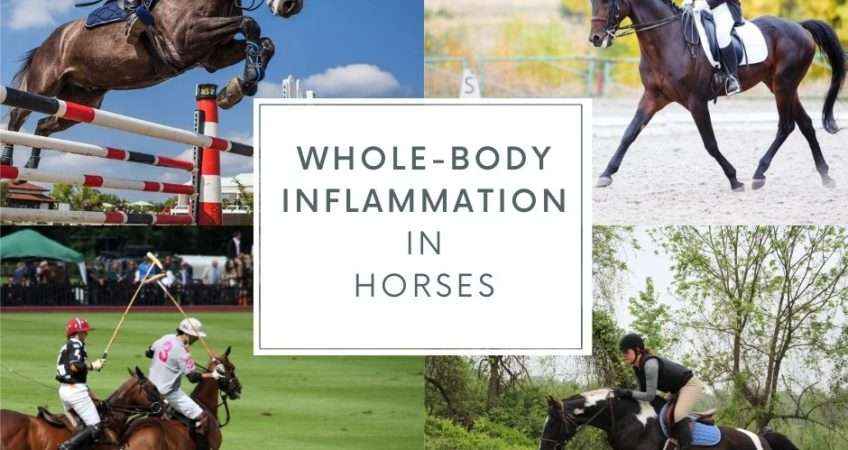 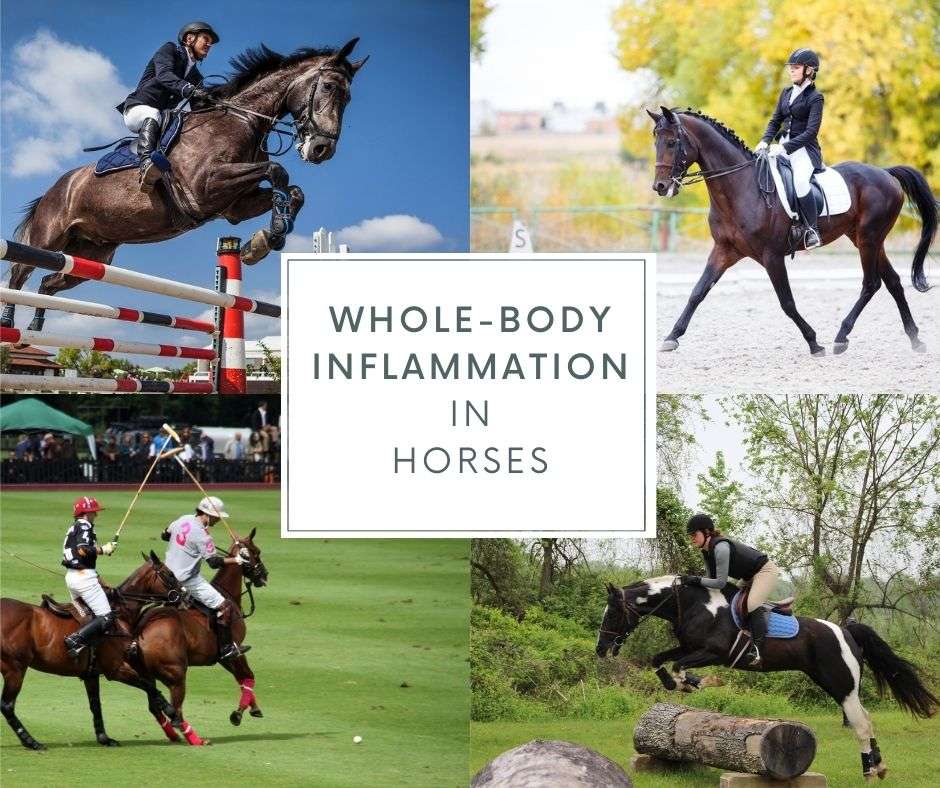 Equine researchers have been studying the concept of whole-body inflammation and its links to a variety of health problems for years.

But what is whole-body inflammation?  How does it relate to my horse’s overall health?

When someone mention “inflammation”, you may picture a localized swollen area on a limb or around a wound.  But inflammation also occurs systemically, affecting the whole body.

This has been a lively point of discussion in the medical community for years when contemplating the management of chronic diseases in humans.  Researchers from the field of equine medicine begun studying the concept of whole-body inflammation1 because of its link to a number of conditions, including

Normal inflammatory responses are a crucial part of healing.  However, when the body’s protective responses become amplified, this can turn into a chronic problem.

While inflammation may start in one part of the body, when there is an excessive expression of inflammation, this releases substances into the circulation that act systemically on other tissues throughout the body.

How obesity and insulin resistance relate to inflammation

When the energy horses gain from consuming carbohydrates is not used or stored in the body’s tissues properly, it can negatively affect the horse’s endocrine (hormone) system and ultimately lead to body wide inflammation.

Jessica Suagee-Bedore, PhD, and assistant professor of equine science at Sam Houston State University, in Huntsville, Texas, explains: “When an animal is sick and off their feed, there is continued need to preserve glucose for tissues that require it, such as the brain.”

The problem is that the body doesn’t distinguish between the signal to initiate a sickness response, and the signal it receives when the body suffers from a poor diet or obesity.

Should an animal eat a diet high in starches and sugars or is already in a heightened state of inflammation due to obesity, insulin resistance soon develops.

What is Insulin Resistance?

Any horse that is overweight can become insulin resistant. Insulin resistance is defined as a reduced sensitivity to insulin – the hormone responsible for regulating glucose in the body (such as after a meal). One chief concern of an animal’s body is the prevention of hyperglycaemia (elevated blood glucose levels) or hypoglycaemia (low blood sugar levels), as either of these can lead to a host of physiological problems.

Factors such as breed, exercise, diet, and aging may affect the link between inflammation and obesity.  Older horses are specifically susceptible to this phenomenon, also called inflammaging.

The intestinal tract is a huge contributor—as much as 70%—to the body’s immune system and tends to be the cause of many problems.

One theory suggests that when an endotoxin from dying bacteria interacts with the immune system and gets passed out of the intestinal tract into the systemic circulation, it can result in body wide inflammation. This is known as leaky gut syndrome.

Leaky gut has been found by researchers to lead to other types of systemic inflammation such as skin allergies (hives or itching) or laminitis.  This being said, the intestinal tract seems to have an amazing capacity to repair itself, known as restitution.

An interesting find is that researchers studying2 pigs, mice, and humans have demonstrated that early life stress – weaning, early separation, and nutritional deficiencies – correlates with a likelihood of intestinal inflammation later in life.

This phenomenon might impact horses as well.  According to Liara Gonzalez, PhD, assistant professor of gastroenterology and equine surgery at North Carolina State University, while there is no current data on the effects of early stress on aging and inflammation in horses, it causes cellular changes to DNA, possibly causing tissue to injure more quickly and heal less easily.

Inflammation and the brain

Body wide inflammation related to leaky gut syndrome may have other behavioural effects.

In growing horses this has the potential to spawn behavioural problems that could carry over to their performance careers.

The role of diet in controlling inflammation

Because obese horses already have slightly higher levels of inflammation, if they consume high-starch and -sugar feeds, the resulting inflammation burst can tip the scales of a previously balanced seesaw.

According to Suagee-Bedore, a lean horse may handle the sudden burst, while the obese horse’s inflammatory condition is exacerbated.

Effects of exercise on inflammation

Athletic horses have a reduced risk of developing insulin resistance because even minimal amounts of exercise increase insulin sensitivity.

While low-level inflammation associated with tissue repair is not harmful—in fact, some inflammation post-exercise is normal, leading to muscle and bone adaptation and healing—elevated or chronic inflammation can lead to muscle tissue damage and scarring, according to David Horohov, PhD, chair of the department of veterinary science and director of the University of Kentucky’s Gluck Equine Research Centre, in Lexington, USA.

Temporary muscle soreness can lead to short-term increases in body wide inflammatory responses, he says, but these resolve quickly without needing intervention.

Long-term use of NSAIDs (non-steroidal anti-inflammatory drugs) increases intestinal permeability (leaky gut) significantly. This puts the horse at risk for a systemic inflammatory response due to leaked bacterial endotoxin.

Horohov further goes on to say: “Since NSAID administration is thought to lead to ulcer formation, omeprazole, a proton pump inhibitor (PPI) drug, is frequently given with NSAIDs. However, studies3 have shown the opposite effect, with PPI drugs actually aggravating NSAID-induced intestinal damage.”