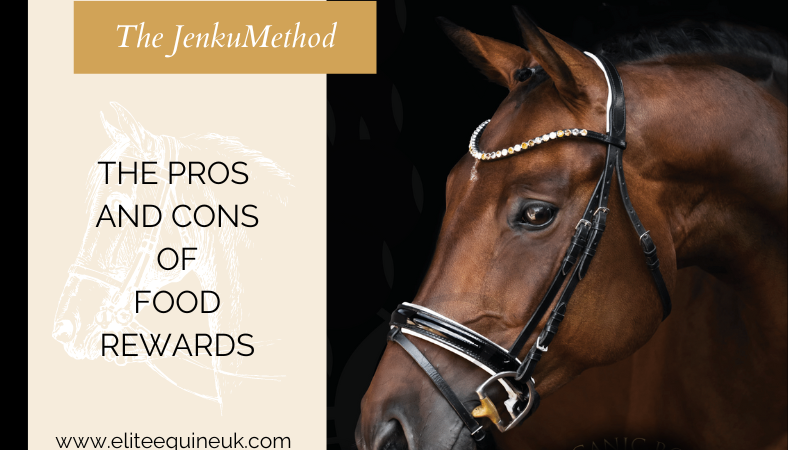 The JenkuMethod: The Pros and Cons of Food Rewards in Horse Training

A lot has been said about the pros and cons of food rewards in the training of horses.

In a conventional world, horses are trained from the outside in, and people are obviously only doing the best that they can do with the information that they have available to them.

Once new information is available, this should influence subsequent action, shouldn’t it?

Some controversy still exists around the use of food rewards, with some people feeling that the horse should do whatever he is asked to do, not in order to get the food reward, but out of respect and love towards the one who’s asking.

This is not the way a horse’s brain works.

Two of the elements to look at when discussing learning theory (how horses receive, process, and retain knowledge during learning), is positive punishment and negative feedback.

Positive punishment is creating pain as feedback.
Negative reinforcement is taking the pressure or the pain away when the horse gives the desired response.

Positive reinforcement is when we give the horse food or reward as feedback. On the flipside of that is when the horse is not giving us what we want, we are not rewarding.

There seems to be a clear division among horse lovers along these lines: the Pressure/Release people and the Reward/No Reward people.  It is actually two separate methods.

I call the first one the Reward Method, and the other the Release Method – always focusing on the positive.

Many people in the horse world are stuck in this way of working with pressure and release only.   Oftentimes horse handlers have poor timing, they give negative feedback when they are supposed to say “yes” while also keep the pressure on.  People are not good at giving releases back and saying “yes”. That is why there is so much stress and anxiety within horses, since they have to play a guessing game, trying to read people’s minds.

Triggering The Parasympathetic State in Horses

Every living being has an autonomic nervous system and it has multiple functions:

To read more on this, visit my earlier post here Uncovering the Mind/Body Connection in Horses

History has shown that all living beings naturally move away from pain and move towards pleasure, being guided therein by their autonomic nervous system.

You cannot take the fight-or-flight side of the autonomic nervous system out of the horse. His heart will stop beating and the horse will stop breathing.

The most effective way in which to get the horse from the fight-or-flight state, especially modern horses, into the rest-and-digest state, is to give them something in their mouth so that they can swallow it, thereby short-circuiting the brain to get the blood away from the muscles back to the intestines.  In the horse’s mind a trigger is toggled that food is on its way, the blood cannot be in the muscles and in the intestines at the same time, and that is when the horse goes into the parasympathetic state.

It can be achieved without food, but generally people are not good at noticing when a horse is trying to do right, the smallest try, and then to say “yes, you are on the right track, you’re getting warmer”. This applies to instructors, Grand Prix level riders, and A- grade show jumpers.

When talking about food rewards, it’s not just about feeding the horse.

Direct and accurate feedback is where we bring the marker’s sound in and so that you can let the horse know, “yes, this movement or this action that you performed right at this moment, is actually what I want, and this is why I’m giving you the reward.”

In this way, there’s absolutely no doubt in the horse’s mind why they are getting the reward.

Looking at it from this perspective, there are actually no disadvantages when it comes to using food in horse training.  However, the onus is on humans to educate themselves to the point where they understand learning theory, the physiology of the horse, and they understand how motivation works.

Next week in The JenkuMethod: The Invisible Box

If you live in Mainland UK or the Isles and would like a FREE palatability sample of our Elite Equine rosehip supplement, please forward your delivery details to [email protected]